Chapter 4 – Stuck in a Rut – Real Talk with Taylor Tom 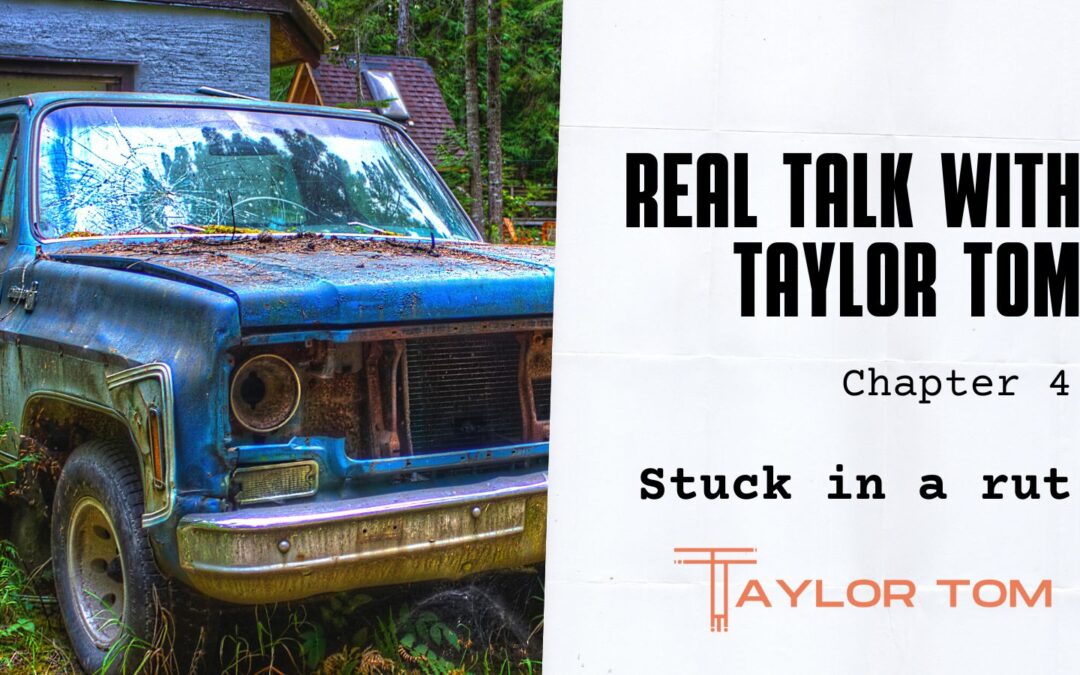 Stuck in a Rut, This is a true-crime story that you most likely have never heard before.

I am going to go back in time and tell you my life’s story as far as I can remember. For you to get a look into the whole story, not just the one tragic event. It’s been a rough ride along a rocky road, which has me currently confined to a cell behind the walls and fences of an American prison. Though I am still breathing, I am serving a life without parole sentence.

E hooked up the battery charger and we had a cigarette, I asked how long it would take? He said I don’t know could take hours with that piece of the shit charger. I had to go do my paper route so I told him I would hit him up when I got done. Man, I thought the whole time, if I was able to get that car running, I’d be in there, no more riding the bike. Sure enough, I got back and tried it, and it fired right up. I got ahold of E and picked him up. We went for a Cruz out to the logging road and blazed a bowl. This is gonna work out great. No more riding that damn bike for the paper route. Plus we got a ride now. Only it’s not like I can just use it whenever and go wherever if I want to keep this going.

My mom would get home around six or so sometimes later. Most of the time she would be sauced or at least halfway there by the time I talked to her. I tried to avoid entering into too many conversations. She was always on some kind of lecture. Often times things would end in yelling and screaming or worse. I felt trapped and hated my environment at home.

The first trial run went off without a hitch and we were in business. I was able to use the car most days, but there were some really close calls so I had to slow down on using it. My cousin was giving me a really good deal and thought I could have made more if I did it by myself. This way I didn’t have to do the footwork. It seemed everything was going well, until one day I was driving home from the paper route and mom was already home.

So I went and parked the car somewhere it wouldn’t be seen and walked home. Everything was good, I thought I was going to be able to bring the car back the next day. Turns out that’s not the way it went down, At about 10 am I was called into the principal’s office. My mom was on the phone asking about the car and telling me it was missing wondering if I knew anything about it. I said no I didn’t and I knew I was screwed. I got home that day from school and nobody was home so I went to get the car, I thought about taking off out of town, but the car wasn’t in great running condition, plus it didn’t have tags on it, so I decided I was going to run away into the woods. I took off on a logging road and ended up getting the car stuck in a rut. so I left on foot. like I was Daniel’s boon or something. Needless to say, I didn’t last more than a week and ended up trying to go to a nearby store to buy food and there was a missing child alert out so the store ended up turning me in…

Stay tuned by subscribing, never miss the latest updates. If you think this is an interesting story please share it. Have a great week, until next time…